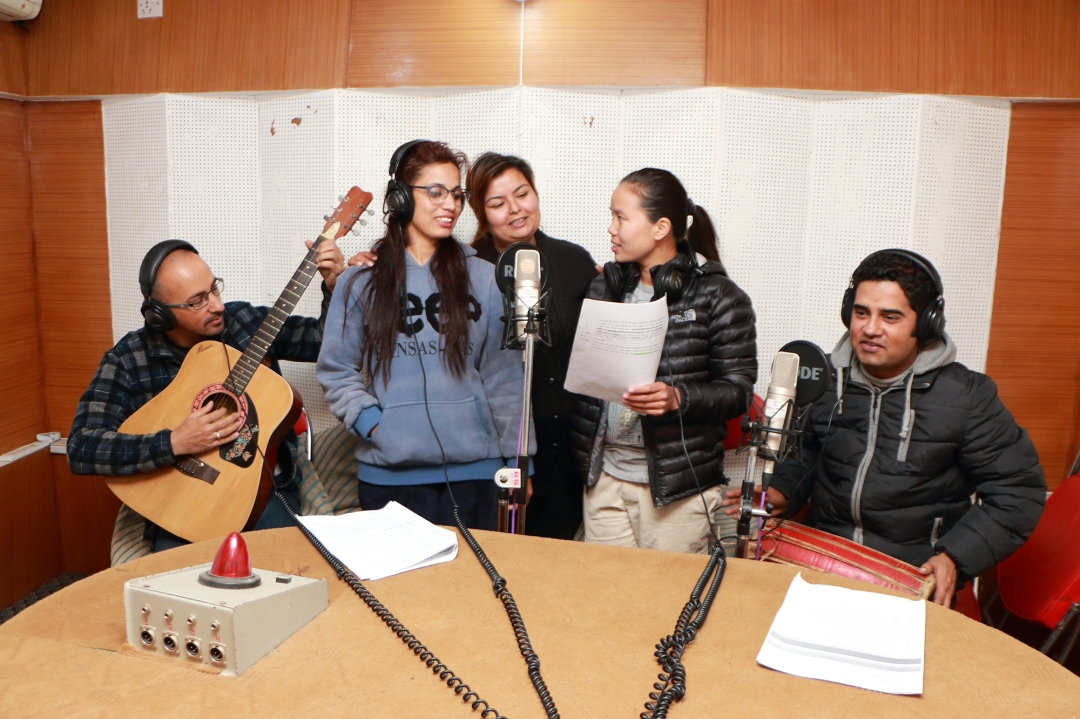 A hotel, particularly one that is located on a highway, is traditionally a place where women in Nepal are considered to be unsafe. Their home, on the other hand, is meant to be a safe haven where women are protected…And yet a group of radio producers in Nepal have chosen a hotel on a highway as the setting for a new Nepali radio program, which is taking the unprecedented step of reaching out directly to married men and women in their homes to talk about violence free relationships.

This half hour radio drama and discussion program launched by Equal Access International in Nepal is the key component of the multi-faceted ‘Change Starts at Home’ project, part of the DFID What Works portfolio, supported through South African Medical Research Council.

The hotel  where the drama is set is run by Manarupa and Surya Singh, a married couple who work hard to have a balanced and happy marriage.  Through their interactions with each other and the stories of those who visit the hotel, Manarupa and Surya welcome listeners into their lives where they share the daily struggles and triumphs of maintaining a harmonious, peaceful and happy family life.   The program is aptly named ‘Samajhdari‘ meaning ‘mutual understanding’ in Nepali and is targeted at married couples with the aim of reducing intimate partner violence (IPV) and encouraging more happy and healthy relationships between wives and husbands.

As in many parts of the world, gender based violence (GBV) and IPV in Nepal is deeply rooted in social norms, values and cultural practices that set the unequal power relations between husband and wife. From the first day of the marriage, a woman is taught that she needs to bow to everyone in her husband’s family and cater to their needs above her own to be acknowledged as a good daughter-in-law.  Taught from childhood that her primary role is to uphold the family reputation (both her own and the family of her husband) women are frequently rewarded as a virtuous wife and daughter for keeping silent about abuse. This lays the foundation for unequal relationships and ultimately contributes to violence against women, including intimate partner violence, and the silence that surrounds it.  Violence between married couples is viewed as a private matter in Nepal and IPV particularly is something that no Nepali women should admit or disclose as it is directly linked to the prestige of her family.  The teaching that has been given to her since day one is so deep rooted that it shapes her overall personality and thought process. In many instances, she actually believes her husband hits her because he cares and because she must have done something that deserved the punishment.

The preliminary results of the baseline study conducted as part of the project in March 2016 certainly reinforces this, highlighting that 49% of women agreed that if a woman discusses her domestic problems with others, she brings shame upon her family. According to Dr Cari Clark, PI of the Randomized Controlled Trial (RCT) being done to assess the project impact, the preliminary analysis of the baseline data shows the 12-month IPV rate among the study respondents to be double that of the most recent DHS survey, which clearly shows the high prevalence of IPV in the project’s target communities.

But can a highway hotel really help bring about change in people’s relationships? Anu Upadhayay, who is leading the production for the Samajhdari radio programs thinks it can, “rather than discussing who is right, what is wrong and how men need to correct their behavior, as many GBV programming does, Samajhdari uses drama and discussion to encourage people to understand and address the beliefs and norms that underpin negative behaviors and contribute to occurrences of IPV against women in Nepal. Through Manarupa and Surya Singh, the radio program highlights issues like power dynamics, sexual consent and gender identities & roles; showing the relationship between violence and the cultural norms, roles, codes, and ideals of masculinity“.

Pawan Neupane, production member of Samajhdari radio program believes that this program is as much for male audiences, “It’s not just women, often men are also victims of patriarchy. Existing gendered stereotypes prevent men from openly showing their emotions, which they are expected to hide no matter what. Lack of other outlets push men into channeling a wide range of emotional responses into anger which ultimately leads to GBV and IPV. This also prevents men from being truly loving towards their wife and other family members. So at the end, its men who are also losing from such behaviors”.

Whilst the Samajhdari radio program is the central component, the overall project goes beyond radio waves, combining media with direct community mobilization in the three targeted districts- Chitwan, Nawalparasi and Kapilbastu. The combination of innovative and interactive radio programming and weekly listening and discussion sessions aims to support the couples through a process of change that goes beyond gaining knowledge to actually putting what they learn in to practice in their own relationships. The project also includes family members and community / religious leaders so that they can also support the change the couple is going through, while developing knowledge and skills themselves to deal more effectively with family conflict using non-violent methods.

By openly discussing the issues that perpetuate IPV on the radio and in the group sessions, the project is challenging the acceptability of violence and instead promoting balanced relationships between men and women that are based on respect, love and support.  As a couple who are involved in our weekly listener group explained: We didn’t have the habit of talking to each other previously but these days we find time to talk to each other about almost everything….the radio program has been a huge part in the changes that has happened in our lives..We have gathered inspirations from the characters. We aspire to be an example just like Surya Singh and Manurupa and and we learn from the mistakes of Padam Dai and Shiva to not repeat it in our lives.   With Manarupa and Surya Singh showing the way, Equal Access believes that the highway hotel will continue to inspire men and women across Nepal to build relationships which are based on true companionship and mutual understanding.

View all posts by changestartsathome